Two years ago, I wrote a post about tennis.  It's time for the update.

Originally, we had two tickets for Friday evening, March 27, 2020 in Section 102, Row 7 and a realistic chance of seeing either Djoković or Nadal play.  Thanks to the pandemic, the tournament was cancelled.

The 2021 Miami Open was held but the top players had announced in advance that they would not be playing and fans were limited.  That brings us to the 2022 Miami Open.

As my credit was expiring, I bought 3 tickets ($300) in February for Section 101, Row 1 for Friday evening March 25th.  There would be no Djoković or Federer but major winners Nadal, Murray, and Medvedev were a possibility for us to watch play.

Fast-forward to a week before the tournament and Nadal announced that he was withdrawing due to injury.  And with that, my wife lost all interest in going.  She likes tennis but without the Big 3, she asked if I could find a replacement.  Our friend in Miami, who was going with us, had no trouble finding a replacement to take my wife's ticket.

Typically, the number one seed (or #2) play in primetime on Friday evening.  Andy Murray ended up winning his round one match Thursday night and was set to face #1 Medvedev Friday evening.  A fantastic match, in my opinion, since both had previously been ranked #1 in the world and both are major winners.

On Thursday evening, the schedule was released and the match was set for noon on Saturday.  The organizers put the #1 seed as the first match of the day on Saturday.  It is my belief that the Miami Open organizers (due to Medvedev being Russian and the current war in Ukraine) moved the match intentionally to noon Saturday instead of letting them play in primetime.

It had been disappointing knowing that the Big 3 weren't going to play in the tournament.  This last minute switcheroo sucked for me but it validated my wife's decision not to go.  I flew down Friday afternoon and was picked up by the two friends at FLL.  We drove straight to the Hard Rock Stadium.

We saw two matches.  The first one was a women's match between a major winner from Poland, Iga Swiatek, and Swiss, from a Serbo-Croatian family, Viktorija Golubić.  The #2 ranked Swiatek had no trouble winning in straight sets.

The second match was an exciting three-setter between Americans, Frances Tiafoe and Brandon Nakashima.  It's hard not to think - what if the pandemic had not happened and the Big 3 showed up as expected.  I did accomplish my goal of attending all major sporting events on my list.  But, my mission to see Djoković play live will have to wait another day.

With everything that has happened over the last two years, attending a live sporting event with perfect weather and a cold beer in hand sure felt good. 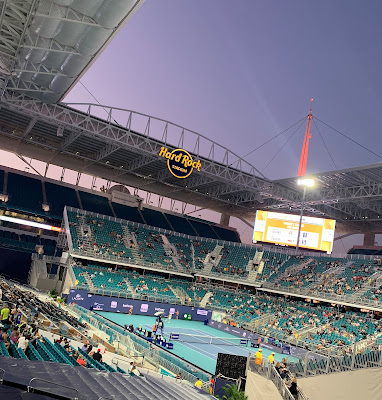 By Ace at March 31, 2022
Email ThisBlogThis!Share to TwitterShare to FacebookShare to Pinterest