We pick-up where we left off during the last session.  My stack was getting down to about $100 but I managed to win a few hands and get back up to $175.

Sitting in seat 5, I look down and am pleasantly surprised to see A♣-A♠.  It folds to me in mid position and I bet $10.  Seat 7 immediately calls and it folds to SB in seat 10.  SB is a young Asian guy who has been chatting it up with seat 9 about hands.  He seems competent.  Earlier he was involved in a three-way hand where he had to fold to a shove from seat 9 after the flop.  Apparently seat 9 was trying to isolate and seat 10 folded two pair.  Seat 9 had an ace high flush draw that he hit on the turn.  They spent over ten minutes discussing that shove.

What do you think he had?  Would you have played it differently? Leave a comment.

Then you can click the button below to see his hand.

By Ace at April 27, 2016 4 comments:
Email ThisBlogThis!Share to TwitterShare to FacebookShare to Pinterest

Slowrolled or Not So Fast

An interesting situation occurred last time I played $1/$2.  I was parked in seat 5 while my opponent was in seat 8.  Seats 9 and 10 were discussing strategy throughout the evening loud enough for most of us to hear.  I had won a few hands were my bets produced folds from my opponents before showdown.  Also, the few hands I lost I didn't have to show.  Apparently, it came to a point where seats 9 and 10 were curious if I was bluffing a lot or had the goods.  They would try to put me on a hand since I didn't show.  I let them guess without telling them my hands.

Here is where the situation gets interesting.  Seat 9 mutters something.  Since seat 8 called the turn, I am thinking there is a chance he has a Q.  I'm looking at him and expecting him to say that he has a Q.  Instead he says, "You need to show."  At this point I'm definitely certain he does not have a Q.  Since he called me, I turn over my 10♠-10♣ and at that point he flips over K♥-K♣.

Before this session, I don't remember the last time I raised my voice at a poker table.  As soon as I saw his hand, I laid into him.  "Why did you say I need to show?  Don't you realize you just slowrolled me?  What did you think I had?  What were you afraid of... quads?"  With a straight face he says, "Yes."  Now, I am really confused.  Is this guy really this clueless or is he just trying to tilt me.  So I kept talking to seat 8 and at this point seat 9 speaks up and says, "I told him to ask you to show because it's valuable info."  He mentions the hands I had bet and players in the hand had folded.  Seat 10 chimes in by saying he understands how I could interpret seat 8's actions as a slowroll.  But he also seems to agree with seat 9 that the value of seeing my hand was more important than etiquette.

So I ask you, was it a slowroll or do seats 8, 9, and 10 have a point?
By Ace at April 21, 2016 9 comments:
Email ThisBlogThis!Share to TwitterShare to FacebookShare to Pinterest

I usually stay pretty busy during the summer and fall months.  But once the short days of winter and the cold weather arrived, my outdoor activities become limited.


One weekend I wanted to play some cards.  So I did a Google search to see if any casinos offered poker and were within a two hour drive.  I found out that Dover Downs seemed like the most convenient place to visit.  I kept searching online for comments and reviews on the Dover Downs poker room and stumbled onto this 2010 post by the Poker Meister: Dover Downs Trip Report.

After reading many posts by the Poker Meister, I came across another local blog.  This blog was named the Poker Barrister.


Soon after that, I discovered the Holy Grail of poker blogs.  It belongs to the man, the myth, the legend Tony Bigcharles and is titled tbc's blog about grinding low stakes poker.  From there I went on to discover Rob’s blog and many other blogs.

As for my blog, I'm not sure what topics I will cover other than golf and poker.

An ace is a big deal in golf and it is the best card in poker; so with that, I leave you and hope you have an ace in the hole!
By Ace at April 17, 2016 3 comments:
Email ThisBlogThis!Share to TwitterShare to FacebookShare to Pinterest

No Spirit in the Air

Earlier in the year, I found a good deal for a flight to Vegas ($200 round trip direct).  We booked that great airfare deal through Spirit Airlines.  I prepaid for the car rental and the hotel.  I was excited because we planned to rent a car and go to the Grand Canyon for a day.  My girlfriend was excited to see Vegas for the first time.  Neither of us had flown with Spirit before and all we knew was that they were cheap.  Everything was set.

Our flight was leaving at 8am on a Saturday.  I went to bed the night before and woke up in the middle of the night.  I looked at my phone to check the time and there was an email from Spirit Airlines.  They had sent an email at 1am notifying us that the flight was canceled.  I got up and tried to get another flight through their website - no luck.  I called them and the best they could do was offer us a non-direct flight that leaves the next day.  The lady on the phone said our only hope to get a Saturday flight was to go to the airport and speak to a Spirit rep in-person.

In the morning, we drove to the airport.  We found the Spirit counter but it said it's closed until 3:30pm haha.  This cheap airline doesn't even have a regular service counter that's open all day.

Long story short, the rep was unable to help and could only get us to Vegas the next evening.  This would mean we would be in Vegas for 24 hours only before having to fly back home.  My girlfriend and I had already agreed not to take that option if it was presented.  So the rep refunded our tickets.

When I got home, I went on the internet and read reviews on Spirit Airlines.  To say they were unflattering would be an understatement.  If you decide to fly with Spirit Airlines, keep in mind: they charge for carry-on bags, they charge for window seats, their seats do not recline, and when they cancel your flight they only offer a $50 voucher.

Before the trip, I had already written down few sports bets I wanted to place while in Vegas.  Few days after the canceled trip I checked the outcomes of the games and found out I would have won $250.  So in the end, I ended up eating the cost of the hotel and the car rental, and missing out on $250.

It was disappointing to miss a fun trip because of an airline.  There was no Spirit in the air.
By Ace at April 11, 2016 3 comments:
Email ThisBlogThis!Share to TwitterShare to FacebookShare to Pinterest

A Round of Bad Golf

Today I shot the worst round of golf in five years.

There were signs that today wasn’t going to be my day.  First sign came when I woke up tired because I didn’t sleep well.  Second sign was the windy day with 47 F temperature at noon.  The third sign came on the first tee box minutes after I met up with my three friends.

Algonkian golf course's hole 1 is a dogleg-left, 335 yards, par 4.  There is no reason to hit the driver off the tee.  I proceeded to hit my 5 iron into the pond 20 yards left of the fairway, not once, not twice, but three times in a row!  That’s right, I hit three identical shots off the 1st tee three times into the water.  I don’t think I’ve ever done that before in the 13 years I’ve been playing golf.  The fourth sign came when we got to the first green.  It was plugged (aerated), and so were the other 17.  I only hit on satisfying shot with my driver.  Most of the holes had trees running down both sides of the fairway.  It was my first time playing this course.

When you put all this together, you get a Sunday special good for +40 over par for a single round of golf!  Three years ago was the last time I shot over 100.  That tells you how bad it was today.  In March, I shot 83, 90, and 86 on three separate par 72 courses.  That means, I was +43 after three rounds of golf but almost matched it today after 18 holes.

Typically, a bad start, like today, would have ruined my day but I was aware of all the signs so it didn’t surprise me or upset me.  It happens to the best of them, Jordan Spieth was +4 on a par 3 at the Masters today.

I leave you with a photo I took after my best shot today.  I pushed my drive to the right behind some trees next to the fairway.  I hit my 6 iron over the trees and over a bunker onto the green (if you look closely you can see the ball near the flagstick). 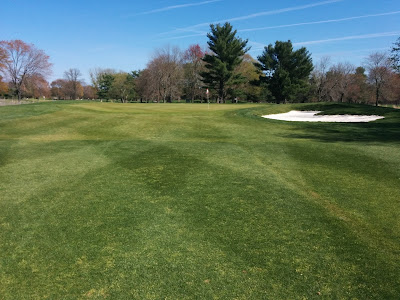 By Ace at April 10, 2016 No comments:
Email ThisBlogThis!Share to TwitterShare to FacebookShare to Pinterest

I plan to write about sports, poker, and travel.

Let's see how it goes.