Let's start with the most positive topic: golf.  2016 will be remembered as an enjoyable year of golf.  I'm not sure how many rounds I played but it is safe to set the over/under at 30.  The scores were decent and on average I played to a 15 handicap.  I got to play at some nice venues and they weren't that expensive.

And just when I thought the season was over, the golf gods delivered a late December present.  A 65 degree day with no wind.  I called up my buddy and we teed it up one more time.  I played in short sleeves.  The course we played is closing down in January for a three month renovation.  As you can see in the photo, all the bunkers have been emptied.  Both of us had to chip over the sand-less bunker.  I saved a par and won the match! 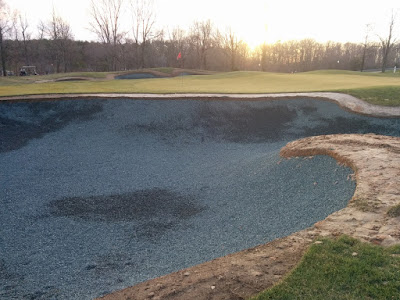 Switching gears, let's talk poker.  2016 will be remember as the year that made me realize tournaments are more fun than cash games.  Cash games at the beginning of the year went well because I ran good.  In the second half of the year, my run-good returned to normal.  I played tired and loose.  I paid off players when it was clear their draws got there.  As a rec player, I'd like to play 10 to 20 tournaments per year and the rest cash games.

That brings us to the last topic of 2016, this blog.  I started the blog because I enjoy writing.  I wanted to share poker hands and get feedback.  And I wanted to write-down some of the memorable trips/moments.  This was my first try at blogging and it went OK.  I'm undecided if I'll continuing in 2017.

Thank you for reading and have a Happy New Year!
By Ace at December 31, 2016 2 comments:
Email ThisBlogThis!Share to TwitterShare to FacebookShare to Pinterest

It's been a sideways dance at the poker tables lately.  I win a session and then I lose a session.  Here is how I gave back the last win.

Throughout the years of playing live poker, I haven't seen anything that was as unethical as the hand I witnessed recently.  I don't feel that great about telling the story and soon you'll find out why.

I had been at the table for couple of hours.  Seat 7 and seat 9 came to the table together.  They were a middle-aged couple.  The lady sat in seat 7 and the guy in seat 9.  We'll call them Wife and Husband. They played few orbits and then went to get food. Shortly after they returned the following hand happened.

The Wife asks the dealer if she can talk and flip her cards over before she makes a decision.  The dealer says yes since it is heads up.  The Wife flips over K♣,4♣.  She stands up and says she is behind but she could hit the straight flush and win the $500 high hand promo (she didn't know it but her statement was incorrect since a player has to use both dealt cards to make a high hand and for it to count).  She says that she has a one-outer to hit her straight flush if seat 8 flopped the nut flush.

Seat 8 also stands up and is staring at the board.  I'm looking at both of them as they stand next to each other.  The Wife glances at her Husband who is still seated in his chair but has pushed it back few feet from the table.  Essentially he is in seat 8's peripheral vision.  The Husband nods his head and with his lips (not out-loud) says "call, call" to the Wife.  I see all this happening but I don't know if anyone else is paying attention to the Husband.

At this point, I suspect that the Husband folded the A♣.  I might be wrong but it was my logical conclusion.  Within 5 seconds of this happening, the Wife makes the call.  Seat 8 flips over J♣,7♣ and the Wife wins the pot.

After the hand, the Husband says to seat 10 that he was on a flush draw.  The Wife most likely would have made the call without the Husband telling her to do so.  But, his actions were 100% unethical, in my opinion.

I don't feel good about witnessing what happened and not speaking up.  What could I have said?  It would have been the Husband's word against mine.  Even if another player spoke up and agreed with me, would the result of the hand been different?
By Ace at December 16, 2016 4 comments:
Email ThisBlogThis!Share to TwitterShare to FacebookShare to Pinterest

I got a chance to play some poker this past weekend.  With the weather being so cold, outdoor activities like golf were not an option.  The masses headed south of DC to the brand new MGM casino.  Fearing the crowds, I headed north to Live.  My days at Live are numbered.  I'm wrapping up my poker year and Live career very soon.  Why drive 60 miles round-trip when I can drive under 20 miles and still play some cards.

Now back to poker.  I had a winning session but it could have been a lot better.

Hand 1:  Seat 1 is occupied by a young black guy.  He seems to be a competent player.  He has raised pre-flop and on the flop in position when he sensed weakness.  Seat 4 is in his early 50s and is a new player to the table.

Hand 2:  I've been playing for a few hours when an older lady joins the table.  I think she was playing $150 to $175 behind and I have twice that in front of me.  Few orbits later, I get dealt A-K UTG and bet $10.  The lady calls and everyone else returns their cards to the dealer.  The flop is Q-J-10.  I assume she has to have hit one of those cards so I check.  She bets $15.  I want her to think that I'm pondering a call (but all I'm really thinking about is Vegas and the fucking Mirage).  Haha...not really but I was envisioning her chips being pushed my way.

The turn is a blank and I check again.  She bets $25.  Now I know she likes her hand.  I raise to $55 and she moves all-in.  I snap call and she tables K-9.  What a great feeling to see her hand wasn't A-K.  We just had to go thru the customary procedure of having the dealer put out the river card so I could start raking in the pile of redbirds.  The dealer puts out an ace on the river and we chop!

By Ace at December 12, 2016 2 comments:
Email ThisBlogThis!Share to TwitterShare to FacebookShare to Pinterest

Since I've started playing golf, I've been keeping track of all the different courses played.  I've played few courses many times that were near my home or work.  Last week, I played my 50th different course.  It took me 13 years but I finally did it.

First three holes are replicas of U.S. Open or PGA Championship courses.  The next two holes come from The Open Championship and then it's the three holes from the Amen Corner at The Masters.

I played with my buddy who was in the area for work.  On the front nine, I didn't shoot well.  But, we were enjoying the warm November day riding around and having beers.

My favorite hole was #13 which is a replica of the TPC Sawgrass #17 also known as the Island Green.  I ended up parring the hole!  It made my day.  I've watched pros play the real hole many times and hit it in the water.  For a moment, it felt like I was in Florida playing the Players Championship on a Sunday.  Here are a few photos from that afternoon. 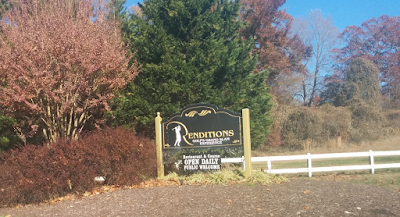 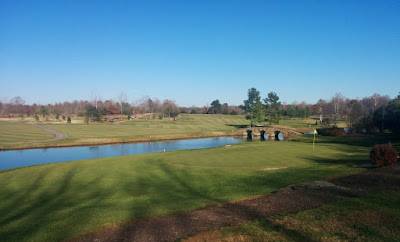 By Ace at December 01, 2016 No comments:
Email ThisBlogThis!Share to TwitterShare to FacebookShare to Pinterest
Newer Posts Older Posts Home
Subscribe to: Posts (Atom)