This past July, I flew to the UK from the US in 30 minutes!  How is that possible?  What kind of a plane did you use? you might ask.  Well, I used a technicality!  The flight was not from IAD, JFK, or BOS in the US to LHR in the UK.  That type of flight would take about 7 hours.
But flying from Puerto Rico (a US territory) to the British Virgin Islands (a UK territory) takes 30 minutes only.  We were in PR in July and decided to hop over to BVI for four days.  Thanks to this trip, I got to learn a bit about BVI.  PR has a complicated relationship with the US.  For example, its residents can't vote in presidential elections but they can vote in the primaries.  Also, Puerto Ricans are free to move to any US state to work, become residents, and then vote in presidential elections.  As for BVI and UK, they also have some interesting arrangements.  BVI citizens hold UK passports but they still need visas to work in the UK.  The BVI residents do not elect their governor (PR does).  The governor is appointed by the queen on the advice of the British government.  Lastly, if you plan to visit BVI, forget about the British pound sterling.  The official currency is the US dollar!  Some of the other islands in the Eastern Caribbean use the Eastern Caribbean dollar.

My wife's family and friends were doing a ten day trip to BVI and we decided to join them for a few days.  We flew out of SJU to EIS airport.  It was an interesting trip.  The terrain was like PR, no surprise.  It was my first time visiting a place where almost 80% of the population was of African descent.  We stayed in Nanny Cay, Tortola.  The family had a great time but I did have only negative experience.

On the last night of the trip, we went to dinner at Peg Legs restaurant (what a name).  The service was very slow.  Not sure if it was due to the amount of diners or just a slow kitchen in general.  I ordered a lobster that came with steamed vegetables and a side of mashed potatoes.  It was delicious.  Within one hour of getting back to our room, the sprints to the bathroom started and they didn't end until the morning.  I'll write a post just on this topic soon.  Back to the good times...

We spent a day at the Cane Garden Bay beach on Tortola Island and another at the Bight Bay beach on Norman Island.  I got a chance to try paddle boarding for the first time and it was enjoyable.  Few photos from the trip: 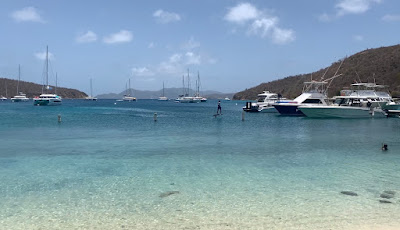 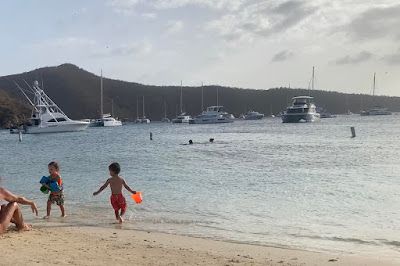 The next post will cover my summer trip to Tennessee.
By Ace at August 03, 2022
Email ThisBlogThis!Share to TwitterShare to FacebookShare to Pinterest