I used to average 40-50 posts per year but in recent years it has been a struggle to reach double digits.  I guess that's what happens when your first child is born right before the whole world shuts down.  Will 2022 be different...I hope so.

I used to have a lot more motivation to write.  Over the last three years, I've stalled when it comes time to "hit the keyboard."  Even when we've done fun things, I haven't been motivated to type.  For example, I had started writing a post last September about our July trip to Europe but never got past the first paragraph.  We've heard about writer's block, but is there such a thing as blogger's block?  Let's get to today's post.

My wife, son, and I were set to travel to Guatemala last December for vacation and to attend a wedding.  I was looking forward to the trip and had arranged to play golf at San Isidro with two cousins.  It would be my second trip to Guatemala and I'd get to add a new golf course to my list.  The first golf course I played (see post) ended up getting destroyed by a volcanic eruption six months after our trip.

We had booked a hotel and flights well in advance.  One day in early November, I was at work and my wife called crying.  She had just realized that she forgot to get a new passport.  We had talked about getting the application finished after our trip to Europe but totally forgot once we had returned.  Technically, her current passport was still valid and it wasn't expiring until February, 2022.  But to enter Guatemala, the rule is that your passport has to be valid for at least 6 months longer.

We tried to see if we could expedite the application but with corona rules/work ethic, there was no guarantee that it would happen.  We ended up canceling our reservations and received flight credits.

For the next few weeks, I joked and laughed with my wife about the blunder.  I might have indicated that I don't think that could have happened to me.  Fast-forward to February and I am sitting at the gate waiting for my JetBlue flight in Fort Lauderdale.

I had a layover for 3 hours and was doing some work on the laptop.  Before I sat down at the gate, I had checked the departures board and got my gate number.  To make a long story short, 15-20 minutes before my flight's departure, I looked up after having my head buried in the laptop and noticed that nobody had lined up to board the flight!  I then looked at my boarding pass on my phone and saw that my flight number didn't match the one displayed at the gate.  Both flights were going to the same destination within 45 minutes.  I was not only at the wrong gate but in a completely wrong terminal!

I walked over to the JetBlue service desk and they were kind enough to rebook me free of charge on the next flight (which happened to be at the gate where I had just spent 2+ hours).  The next step was a dreaded phone call to my wife.

Let's just say, on the call, she made the jokes and did most of the laughing. 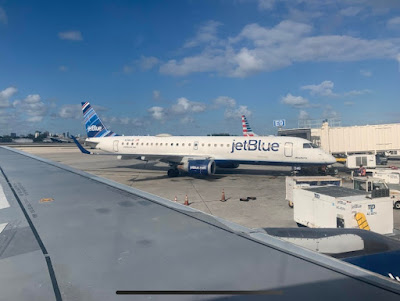 By Ace at March 15, 2022
Email ThisBlogThis!Share to TwitterShare to FacebookShare to Pinterest