About five minutes before our tee time, Sebastian walked to the tee box.  I nodded and waved.  Sebastian's caddie, Ed, walked up soon after.  We exchanged greetings as the four amateurs pulled up in their golf carts.  The four guys would be riding and the three of us would walk the course.

I don't think there was a need to have walking scorers on Wednesday for the pro-am as it pertains to score keeping.  Each pro kept an official scorecard for the group and I doubt anyone was eager to watch live scores posted for all groups.  However, it was beneficial practice for new walking scorers who would work the tournament starting on Thursday.

The pros played from the tournament tees which equated to about 7500 yards while the rest teed it up from, I assume, 6100 yards.  I introduced myself to the four guys after they teed off on hole one.

The pro-am format was a shamble which is a mixture of scramble and playing your own ball.  It's a five man team.  I wasn't sure how serious the pro would be taking the round.  Maybe he would be working on last minute preparations for the tournament.  That's why I opted to talk to Ed for the first few holes when he was free. 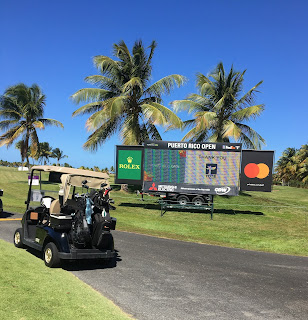 It didn't take many holes to see that it would be a relaxing afternoon.  The pro and the caddie did spend a little bit of time planning/discussing course strategy for Thursday.  But they were also very engaging with the four amateurs (and me 😀).  I found out that Sebastian is from Denmark but now is based out of Florida.  Ed talked a little bit about their previous tournament which was the AT&T Pebble Beach Pro-Am.

I was keeping score for the pro separately from the four amateurs.  The application would then combine them into one team/overall score per hole.  It was all going smoothly until hole number 7 when I found out that I was supposed to deduct the strokes amateurs were getting on certain holes.  I didn't have that info.  They gave me a copy of their scorecard and that made it easy for everyone.  Luckily, there was only one hole from the past 6 that I had to change.  I radioed HQ and they decreased the score by one shot.  After that, it was smooth sailing. 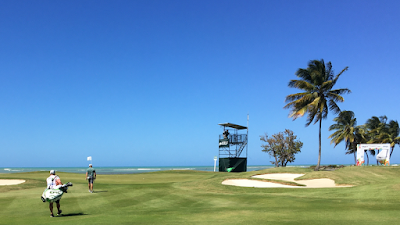 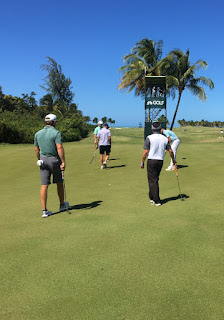 Sebastian had a very solid half round.  He ended up 2 under with no bogeys.

The second 9, aka the front 9 since we teed off on the 10th, was even more fun.  We said goodbye to Sebastian and Ed and were greeted on the first tee box by Lee Hodge and his caddie, Robert.  Lee is from Alabama and played golf at the University of Alabama.  Robert is from South Carolina and graduated from Clemson University (don't ask how they get along 😀).  I fit right in (minus all the recent college football championships) when I told them I went to the University of Tennessee.

Lee and Robert have been working together for about two years.  Robert said that he spends 30 to 35 weeks on the road during a regular golf season.  Lee was playing well also.  I enjoyed watching them discuss a 96 yard wedge shot.  They had the option of going with a 94 yard shot plus a bounce or a 98 yarder with a stop backspin.  One thing that is a bit weird when walking with a pro golfer: sometimes I wasn't sure if saying "good shot" was appropriate.  I might think that leaving yourself with a 12 foot putt is great but a pro might find it to be just an OK approach shot. 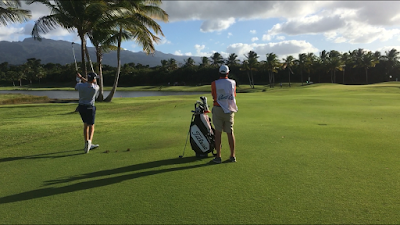 Lee was 4 under but ended up bogeying the 8th hole, par 3, 235 yards.  That hole is really where you see the difference between pros and Joes.
We finished as the sun was setting and the temperature was back in the 70s.  A wonderful day overall.  Later that evening, the scoring coordinator asked if I could be a walking scorer for the official tournament Thursday.  Because of a work meeting I couldn't do it.  Maybe next year.

The whole experience was a 10/10 and I received a voucher to play 18 holes on the championship course!

By Ace at March 05, 2021
Email ThisBlogThis!Share to TwitterShare to FacebookShare to Pinterest