It's been four months since I've played poker at MGM.  Last time I played there I was still a single man in the eyes of the government.  When we got back from Europe, I found out that MGM's new poker room was opening.  If you remember, a year ago I wrote about the rumored room here.  Tonight, I went to check it out and play some poker.

I read a bit about the room online so when I parked in the garage, I knew not to press the "C" button in the elevator.  That takes you to the casino floor.  The "L2" button takes you one floor above the casino where the new poker room is located.  Walking into the room is much nicer now.  You don't have to put-up with all the other casino patrons and the music/noise is quieter when compared to the old room.

Inside the new area they also have a bar with casual food and a sportsbook horse race book.  For some nice photos click here.  Below are a few that I took. 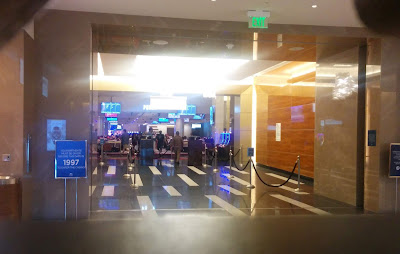 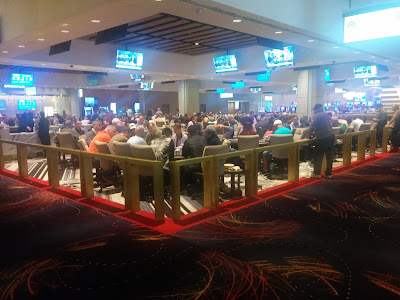 After I walked around for a bit, it was time to play some poker.  I got seated in seat 4 and snapped a photo of my starting stack. 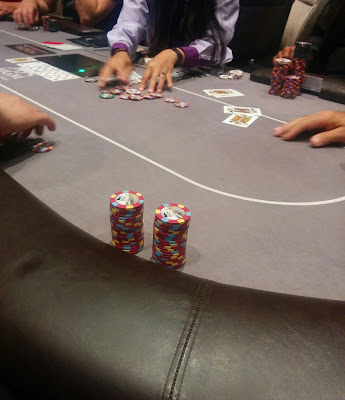 I hadn't played in months so I wasn't even sure I remembered all the rules.  Just kidding.  I focused in on the table play.  It didn't take long to notice that the table was not shying away from putting money in the middle.

Here is an example, three players put $55 in pre-flop. They all checked thru the turn on a 8-8-8-4 board.  The river was a J.  One guy bet and the other two called.  Two players showed J-K suited and chopped.  In another hand, a player bet pre-flop and got one caller.  The flop was A-K-10.  They got it all-in on the flop.  One showed A-K and the other A-J.  The turn was a Q!


I went all-in. He said that he didn't think he would get there and folded.


I was involved in two more hands.  I had Q-9, called pre-flop, led out on a Q high flop, bet the turn, and checked the river.  The other player in the hand also had Q-9 and we chopped the pot.

Well, my wishes weren't fulfilled but I decided to keep betting.  Maybe he doesn't have a flush but has a pocket pair or A-x.  If I check, surely he would bet his flush or A-x.  I beat him to it and bet $50.  He called.  The river was the 3♥.  I bet $75 and he called.  I showed my straight and he mucked. 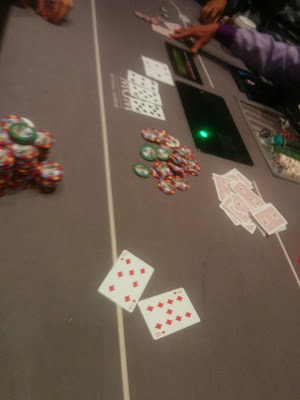 I called it a night soon after.  My first session as a married man and playing in the new poker room was a success.  The main reason I won was because the cards went my way.  Isn't the saying - if you can stay out of trouble long enough, the cards will go your way. 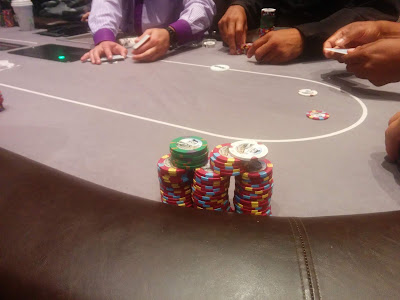 As I was leaving the poker room, I noticed that there was a new terrace overlooking the National Harbor.  Pretty nice view. 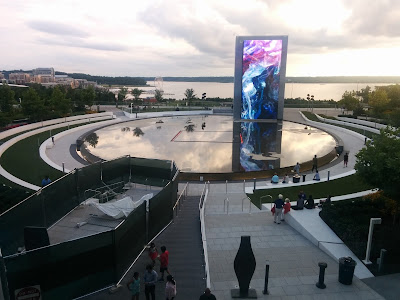 By Ace at July 31, 2018 3 comments:
Email ThisBlogThis!Share to TwitterShare to FacebookShare to Pinterest

I'm back from Europe and back at work.  The past week has been nothing but rain.  I was close to building an ark and purchasing some animals but the sun finally came out today.  An amusing thing happened at lunch yesterday.  Since it took place at McDonald's we'll call it a McStory.

There are many options when it comes to restaurants and fast food around my office.  Even though I'm not a coffee drinker, once in a while I go to McDonald's and get an iced latte.  This trip, my coworker Alan asked me to tag along.

While we were in line, he showed me few coupons on his phone.  One of the coupons was for a free iced coffee with a purchase of a breakfast sandwich.  So I decided to use the coupon.  I ordered a sausage McMuffin, small box of chicken nuggets, and an iced mocha without whipped cream on top.

While I was talking to Alan I inserted my credit card to pay.  When the lady handed me the receipt, I saw the total, $6.66!  I showed it to my coworker.  He laughed and asked me why didn't I add something else to change the total.  I told him that I didn't even realize it was 666.

This is where the story gets interesting.  The lady hands me the iced coffee and the first thing I see is the whipped cream on top.  I shrug it off and take the food once it's ready.  Alan gets his food and we sit down to eat.  I opened the box with the sausage McMuffin but inside I found an egg McMuffin.  I checked my receipt and realize that when I ordered the lady misheard me.  I went back to the counter and they exchanged the sandwich pretty quickly.

Alan and I kept eating and chatting.  After I was done with the sandwich, I grabbed the chicken nuggets box.  I opened it and wouldn't you know it, no nuggets inside!  Instead I found two small burnt patties.  Just two patties, nothing else!  I laughed as I turn the box around and show it to Alan.  He started laughing and said that's what I get when I buy 666 worth of food.

I took the box back and once again they exchanged it for the correct item.  I sat down and cautiously opened the box.  This time the nuggets were there.  Alan and I mused over how every single item on the 666 order came out wrong.  It must be true that the number was cursed.  But then I noticed that they gave me a 10 piece nuggets box instead of a 6 piece.  We each ate a few and laughed about my good fortune. 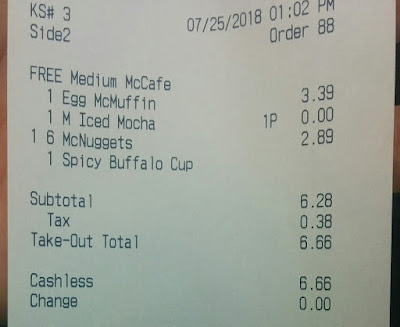 Update:  If you want to read a very interesting McStory check out this article - How an Ex-Cop Rigged McDonald’s Monopoly Game and Stole Millions.
By Ace at July 26, 2018 2 comments:
Email ThisBlogThis!Share to TwitterShare to FacebookShare to Pinterest
Newer Posts Older Posts Home
Subscribe to: Posts (Atom)