Beers, Biltmore, and Beyond: Part 2

The next day started with a breakfast at the Over Easy Cafe.  It was packed and we had to wait for about ten minutes to be seated.  I had the Seasonal Hash Bowl made with butternut squash, rutabaga, Brussels sprouts, red and sweet potatoes, frisée lettuce, radish, Gouda cheese, sausage, and an over easy egg.  It is not something I usually order but it was delicious.

The goal for the day was to stop by three or four breweries and drive to Knoxville in the evening.  Since we were near the Biltmore Estate, we drove there first to see if there was a way to drive around the estate without going inside the house.  The admission to the estate was $50 even if you just wanted to drive around!  We really didn't have enough time to explore the whole estate so we turned to leave.

I walked out through the door first and my buddy followed.  I keep walking and sensed he was walking right behind me.  I started rambling out loud how I paid less to get into the Colosseum, Vatican, Acropolis, Hagia Sophia, Park Güell, Prague Castle, and so on.  When I thought I had made my point, I stopped and turned around.  A woman was looking at me with a big smile on her face.  Right behind her was her husband, also grinning.  I smiled back and started walking towards the entrance.  Outside, by the door, my buddy was looking at something and laughing.  He watched the whole thing go down.  Oh well, sometimes they laugh with you and sometimes they laugh at you 😃.

Next stop was the Sierra Nevada brewery.  I liked everything about it.  We had a few beers and toured the place.  Here are a few photos. 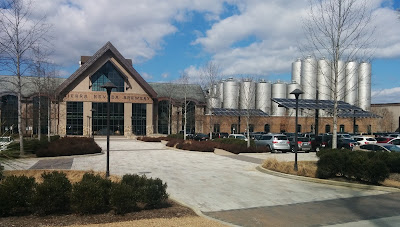 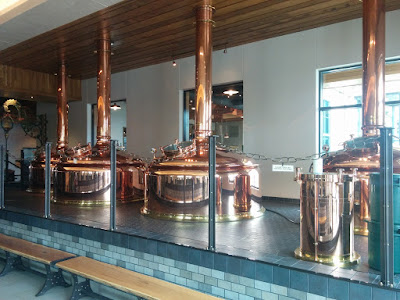 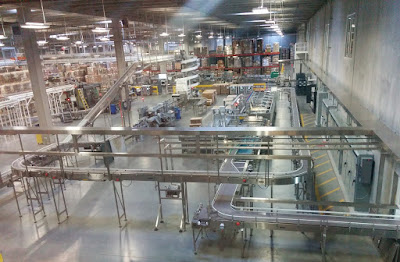 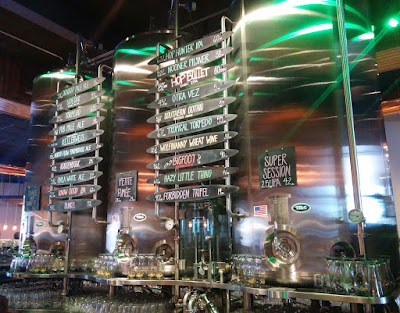 My brother suggested that we stop by and check out the Grove Park Inn resort.  Very interesting place.  Parked in front of the entrance was a functioning 1917 Cadillac.  The story goes that in 1902 Henry Ford left the Ford Motor Company and Henry Leland purchased all the assets and founded Cadillac.  And in 1917 the company came out with a V-8 seven passenger touring car, pictured below. 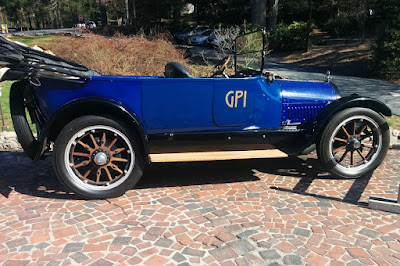 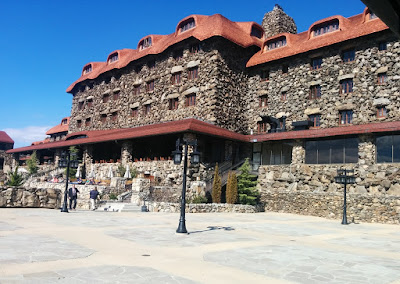 Next, we drove to the New Belgium brewery.  You might know them from their Fat Tire beer brand.  We didn't have time for a tour.  Last place we stopped by was unique.  I had never been to a ginger beer brewery.  But now I can say that I have.  Hidden in what seemed like a back dock of a warehouse, we found the entrance.

We tried several different ginger beers.  They were all refreshing but I'll stick to regular beer.  The bartender said that most of the ginger they use for brewing comes from Hawaii. 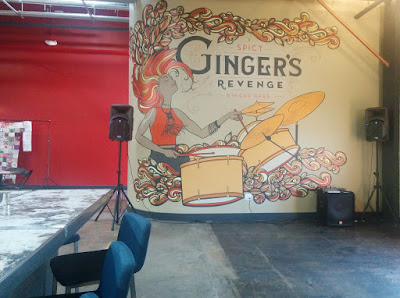 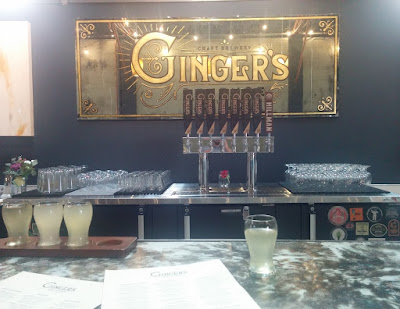 That was all for Asheville.  As for Knoxville, I got to see my brother, his family, my 8 month old nephew, and few friends.  We got in one round of golf before the rain rolled into town.  For February, the weather was exceptionally warm which was all we could ask.

By Ace at February 27, 2018 2 comments:
Email ThisBlogThis!Share to TwitterShare to FacebookShare to Pinterest

Beers, Biltmore, and Beyond: Part 1

I was planning a trip down to Tennessee for the Presidents' Day weekend but the flights were too expensive and the car rentals were also pricey.  But the last weekend in February had good deals.  I ended up booking a car rental for $20 per day.  The lady couldn't take off Friday or Monday.  One of my buddies said he could go but also wanted to check out Asheville, NC.  I had never been so I said sure.

When I went to pick-up the car, I expected to get a compact but instead the lady behind the counter gave me the keys to a 2018 Kia Soul.  Only thing that came to mind about the Soul are a few commercials with hamsters driving and the one below with Michelle Wie.

My buddy took an Uber from DC to my building and we headed out at 8 am.  We took I-66 and luckily there wasn't much traffic.  Once we got on I-81, it was smooth sailing.  The Kia Soul had plenty of space and it was comfy.  But it had a small gas tank and horrible gas mileage.  We didn't even make it out of Virginia before we had to get gas.  The joke was that Kia Soul's favorite parking spot was in front of a gas pump. 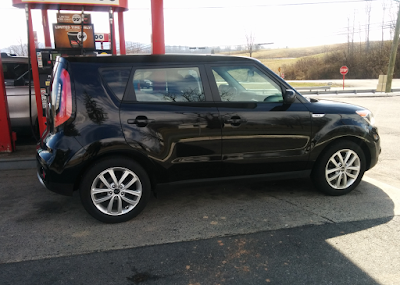 We made it to Asheville around 3:30 pm.  The weather was fantastic, 75 F and sunny.  After checking into the hotel and taking a short break, it was time to walk around downtown and try some of the local beers.  Asheville is third on the list of US cities with the most microbreweries per capita.

First stop was Wicked Weed Brewing Pub.  We got a table outside and started with a flight of 6 beers each and some boiled peanuts as a snack.  Beers were good, boiled peanuts not so much.  People watching was enjoyable.  Most locals either had a tattoo, a dog, or a guitar.  Most had two out of the three. 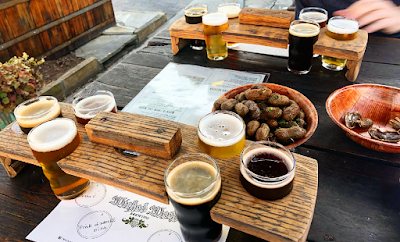 Late lunch was at Farm Burger and the burgers were good.  I didn't dare to go in and see what was going on, but I did snapped a photo of this, interestingly named, pub. 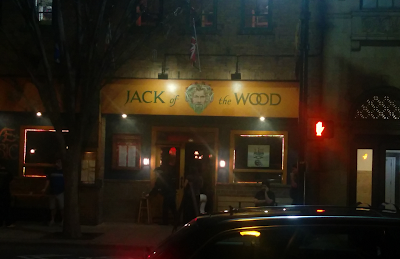 We went to White Labs Kitchen & Tap restaurant for dinner.  It was busy so we sat at the bar and watched Winter Olympics.  I had an excellent wood-fired margherita pizza and a White Labs pilsner.  We also stopped by the Bier Garden sports pub before calling it a night.

To be continued...
By Ace at February 22, 2018 4 comments:
Email ThisBlogThis!Share to TwitterShare to FacebookShare to Pinterest

It has been raining all weekend in DC.  Not much was going on so I went to play some poker last night.

I got to the MGM about 7:45 pm and there was traffic outside the garage.  The garage was full!  Apparently the whole DC metro area had decided to descend down on the National Harbor.  Luckily, they opened an outdoor parking lot so I didn't have to turn back.  There is a new conservatory theme on display in honor of the upcoming Chinese New Year.  2018 is the Year of the Dog. 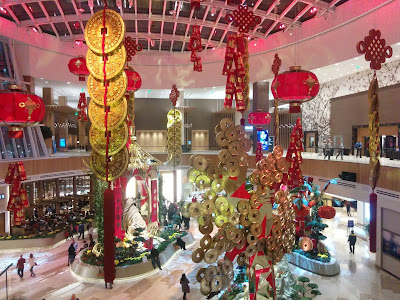 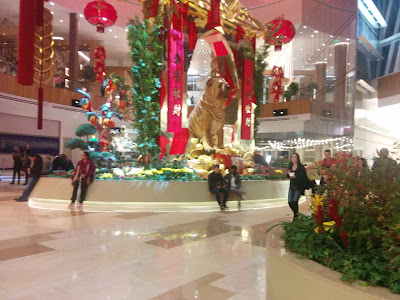 This brings us to the hand of the night.  Close to three hours into the session, I decided to play one more orbit before calling it a night.  On the button, I look down at A♠-A♥.  Seat 6 opens to $15.  Seat 7 calls, seat 8 calls, and seat 10 also calls!  Time to see who really likes their hand.

I turn over my pocket rockets and he turns over...


...two red face cards. I sink into my seat. I look closer and he has a king of hearts and a jack of hearts! Victory at last! I rake in the chips as my stack grows to $580. 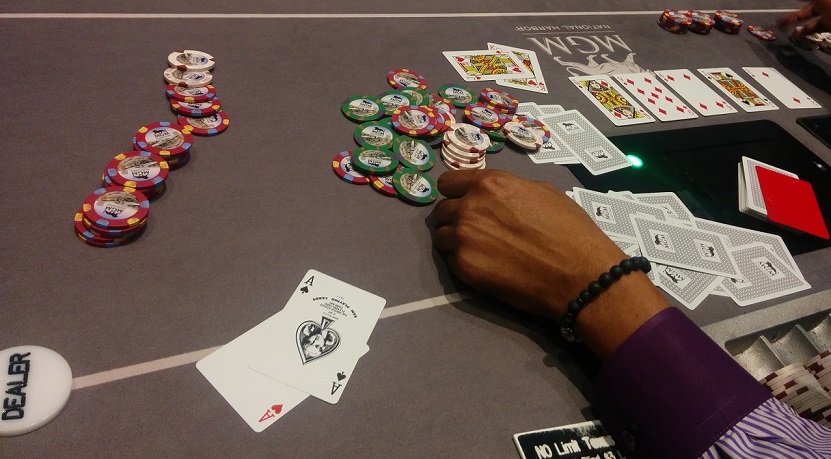 That's poker for you.  One hand determines if you are a winner or a loser for the night.
By Ace at February 11, 2018 8 comments:
Email ThisBlogThis!Share to TwitterShare to FacebookShare to Pinterest

As the title says, this post has a little bit of everything.

Let's start with the Super Bowl.  It was a very entertaining game and the outcome was great.  There were spectacular catches, super quarterbacks, trick plays, missed kicks, little defense, and plenty of scoring.  But the thing that impressed me the most was Philadelphia's coach, Doug Pederson.  He went for it on two fourth downs that 90% of coaches wouldn't have.  And the Eagles converted on both!  Philadelphia won and we didn't have to watch Tom Brady hoist another Lombardi trophy.

I played my first round of golf of the year.  The temperature got into the 50s and I was quick to jump on the opportunity.  I played bogey golf and got it done under 2.5 hours with a cart.  Not many people were out.

Update: I called and he showed A-J.  If I'm folding two pair in a turbo tournament, I might as well not play at all.  I ended up going all in few hands later with As-xs.  Three callers and the flop had two spades!  Unfortunately, no more spades hit the board.  Knocked out.

Update:  If this was not a bounty tournament, I would have folded.  But with $50 on the line, I thought the BB was trying to isolate.  And since I only called pre-flop, he knew I wasn't that strong.  The button turned over J-K and the BB had 8-8.  The board ran out jack high and that's all she wrote.