I've been treading water for the last month or two.  I haven't played that much.  I've had a winning session at all three local poker rooms.  I've also had losing sessions at MD Live and at the MGM.  In my experience, it only takes a few hands to decide if a session ends with a win or a loss.  Let's take a look at some hands.

The first hand, we'll call it the Poker Meister because in a recent post, his opponent beat him with 8,2.
Hand 1:


This hand was very frustrating for three reasons.  One, earlier, I was involved in a hand with the same player.  I flopped a queen-high straight but on the river he caught up and we chopped.  Two, I flopped it but he caught one of his three outs on the turn.  Three, after we both checked the river, I said, "You have an eight, don't you?"  He replied that he did.  Then he turned his cards over and the dealer had to tell him that he had rivered a flush.


This hand happened not too long after Hand 1 above.  Hitting top pair on the flop with a flush draw is about as good as it gets.  I think he called because I was short stacked and he liked his hand.


I was surprised at the number of players in the hand.  I wasn't sure if betting bigger or controlling the pot was smarter.  I definitively thought at least one person was on a club flush draw.  Once I nailed the river, I wasn't sure how big of a bet would get called.  Maybe I could have bet more?

I wanted to include this hand because my river bet didn't get called.  I didn't think the river would have raised any flags for the opponent.  Maybe he was on a draw.  I was left wondering what sizing would have work if he had a jack.
By Ace at June 27, 2017 2 comments:
Email ThisBlogThis!Share to TwitterShare to FacebookShare to Pinterest

Played a short session after work.  Haven't had a chance to play much poker in June.  Let's get to some hands. 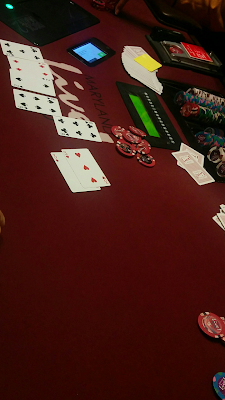 I am in seat 3 with two towers of red birds in front of me.  There is a high hand promo going on.  The high hand on the board is quad jacks.


I called. He was surprised and showed the 7,8 bluff.

I don't improve and after all that, I'm even-steven.
By Ace at June 22, 2017 No comments:
Email ThisBlogThis!Share to TwitterShare to FacebookShare to Pinterest

Poker at the Horseshoe

I finally got a chance to play at the Horseshoe poker room in Baltimore, MD.  The Horseshoe opened almost three years ago and this was my first poker session there.  I played in a tournament two years ago but not in the poker room.  The tournament was held in a big convention hall on the ground floor. 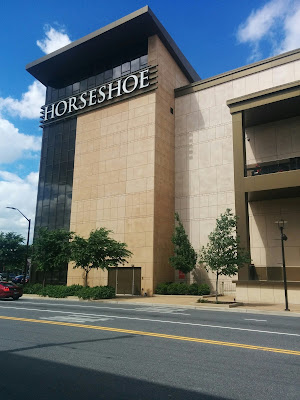 In my opinion, out of the three poker rooms located near I-295, the Shoe looks the best when you walk in.  The MD Live poker room lighting could be better and the MGM poker room entrance is right on the casino floor.  Local poker players and bloggers TPM (blog) and PPP (blog) have played many sessions there.  Even the travelling poker player TBC (blog) has played more times at the Shoe than me.

I decided to make the trip after work and see if a change of scenery brings back Lady Luck. 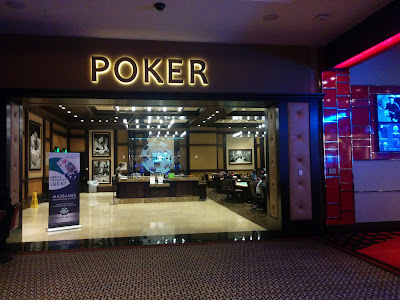 I got my chips and picked up the Ante Up magazine at the podium.  I was sent to a table right away.  I chose the only open seat, 4.


It didn't take me long to realize that seat 5 was the table captain.  He said he was waiting for a $2/$5 seat to open up.  He was in almost every pot and rarely did he make it to showdown without raising big on one of the streets.  It was unfortunate that I was immediately to his right.  I tried limping several hands but his $15 to $30 pre-flop bets/raises made me fold quickly.

The Shoe allows straddling from any position aka Mississippi Straddle.  Maybe I wouldn't mind it if seat 5 wasn't using it so often.  The way the game played and seat 5 having position on me, I didn't like it.  Let's get to some hand summaries.

The table was not tight to say the least.  Seat 5 opens for $10 and gets three callers.  He gets it all-in on the flop with 7-7 versus seat 7 who has K-Q and rivers a straight.  Seat 5 rebuys before the chips get pushed to seat 7.  Table captain was playing aggressively and it cost him another buy-in.  He kept showing the second best hand. 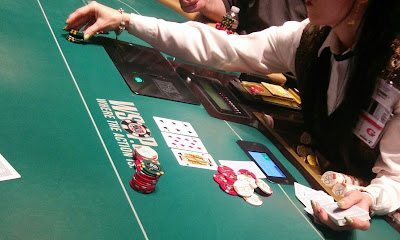 Thank you all for the comments.  I learn a lot from experienced players and their approach to poker.  In this hand, you might say that I made several errors.  I won't disagree.  My thoughts, when it came to my opponent in seat 5, were that he likes to play many hands and is aggressive.  I liked my suited connectors and wanted to see the flop against seat 5 since I close out the action pre-flop.
I check the flop and he checks it too.  Him checking the flop gave me info that I thought was valuable.  I would expect an overpair or a set to bet in order to charge straight and flush draws.  The pot was $21 and I bet $15 on the turn.  I think the bet helps me keep him guessing.  If he has a flush, unless it's ace (or maybe king) high, I'd expect just a call.  And if he has an overpair, he would want to see the river.

When the 5 comes on the river, I bet $25.  If he has an overpair, he might call the small bet.  I don't think a straight would raise.  No way he has a 5 in his hand.  What hand with a 5 would he raise UTG pre-flop.  When he moves all-in, my thoughts were that either he has a flush or he's beat.  Yes,  he could have a full house but that's unlikely.

I made the decision that I wanted to see his flush.  If he has it, I'm ready to say nice hand, sir.  I call and he doesn't seem to like it.  He slowly turns over his cards and I see the A♣ and a black queen.  I feel discouraged for a millisecond.  I look closer and see that it's the queen of spades!

His play made some sense.  He raised pre-flop to $10 with A-Q.  The flop wasn't that good and he checked.  He called the turn after he improved to the nut flush draw.  The 5 on the river looked like a blank.  He probably put me on a 10 or even a straight.  His thinking might have been that he can represent the nut flush and make me fold my hand by raising the river.

I raked in the chips as he got up and left.  I played for a bit longer and then cashed out double my starting stack.  It felt good to call and be right but I could have easily lost. 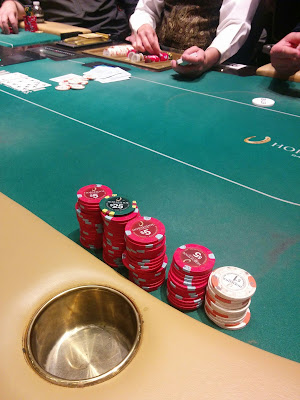 I took some photos of the casino. 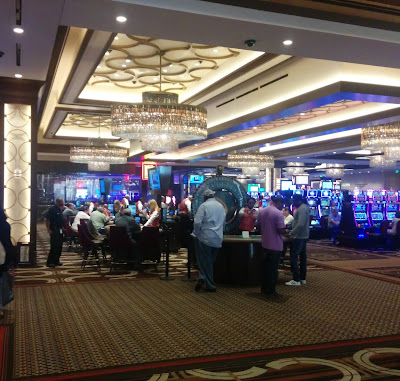 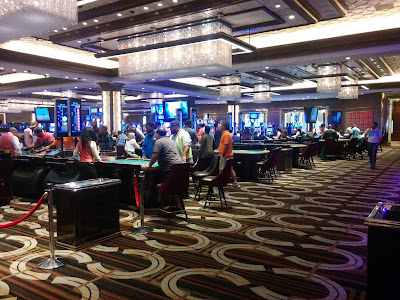 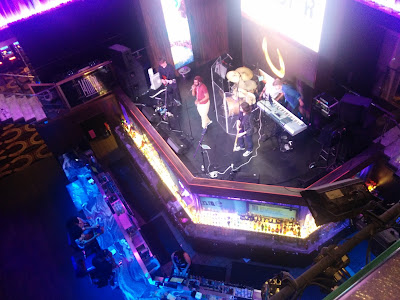 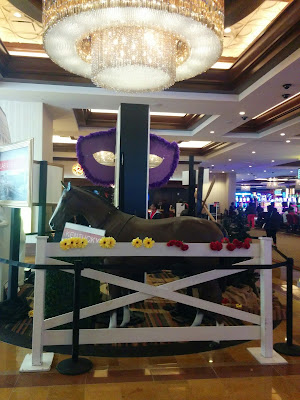 By Ace at June 09, 2017 14 comments:
Email ThisBlogThis!Share to TwitterShare to FacebookShare to Pinterest 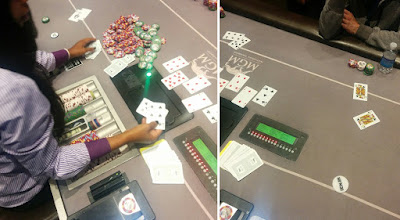 How could I have played it differently?  Maybe I can just call the turn?  If I check the river (or lead out) and he bets (or raises), can I fold a set?
By Ace at June 04, 2017 6 comments:
Email ThisBlogThis!Share to TwitterShare to FacebookShare to Pinterest
Newer Posts Older Posts Home
Subscribe to: Posts (Atom)