Since the engagement story is out of the way, we now return to the regularly scheduled blog about poker and golf.  I guess the title gave it away, another golf adventure.

This time, we head 30 miles south of Washington DC to a Jack Nicklaus designed course.  I was invited to a corporate golf tournament with a four-man scramble format hosted by a law firm.  During peak times the price of a round can exceed $100.  My money was no good there.  Everything was taken care of!

There was one catch, the weather forecast didn't look good as we gathered on the practice green.  Rain with temperatures in the 50s. 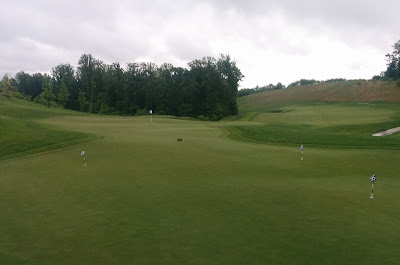 Some of the lawyers didn't showed up.  I can't blame them.  This was a round for golf lovers only.  My team ended up being composed of three golfers: one lady, one gentleman, and myself.  I was the best player on our team since the other two people only play few times per year.  Nevertheless, our spirits were high. 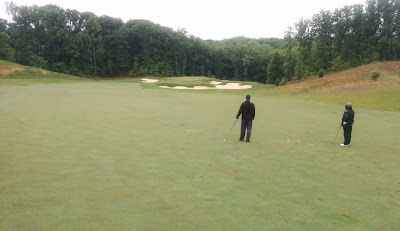 We couldn't save pars on the 4th and 7th holes. 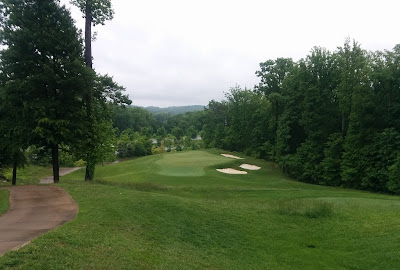 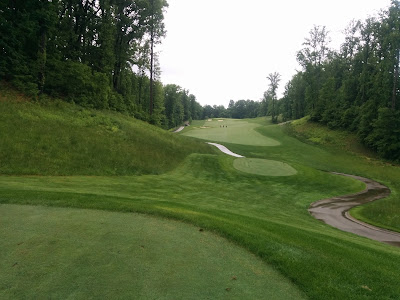 We wrapped up the front nine +3.  The most memorable hole was the par 5 10th.  I hit a great drive down the middle.  Then, I hit a mid iron straight down the hill. 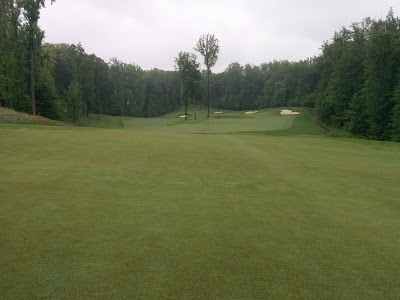 There are two giant trees in the middle of the fairway.  I managed to land behind them.  I still had a shot but it would not be lined up with the flag. 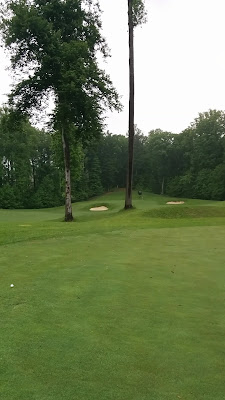 I managed to sneak the ball around the tree and onto the green.  My two partners missed their putts.  I hit my putt and it went in for another birdie! 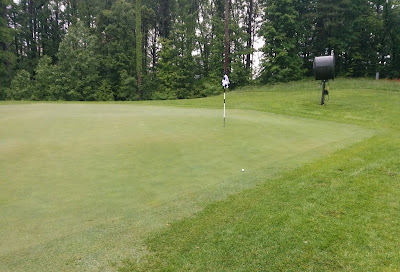 We did not do well until the last hole.  To be more precise, we were +5 on holes 11 thru 17.  But on the 18th, we hit good drives and second shots.  We had an eight foot putt for a birdie.  My two teammates missed their putts.  The putting line looked like it was downhill with a right to left break.  I barely tapped it but it curled and trickled into the cup for a birdie! 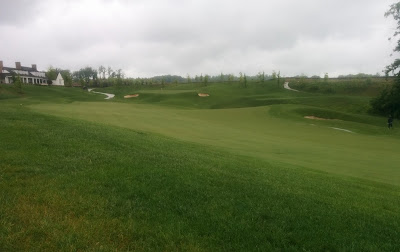 Overall, I give the course an 8 out of 10.  On average, the distances between the holes were very long.  And the elevation changes on the course make it almost unwalkable.

I was very happy to get out there rain or shine.
By Ace at May 28, 2017 No comments:
Email ThisBlogThis!Share to TwitterShare to FacebookShare to Pinterest

I've played a bit over 33 hours so far this year.  I ran very good for the first 20 hours.  My luck has not turned around since I had pocket kings and lost to pocket jacks on the river.  I'm not saying that I've been unlucky.  I haven't had many good starting hands and/or my draws haven't been hitting.

Also, I haven't been enjoying playing.  Playing poker is a hobby and to some degree it should be fun.  Lately, it's felt more like work.  When you are running semi card-dead and the opposition is tough, no wonder it feels like work.

The last session made me realize that it might be time to take a mini break from poker.  I played for about 3.5 hours.  I had K-K and J-J but neither saw a flop.  Sitting there felt like work.  I was trying to read players and the moves they were making.  But mostly, I spent my time folding bad hands.

Two interesting hands happened where two players were dealt the same pocket pair.  Both resulted in chops but it was fun watching the hands play out. 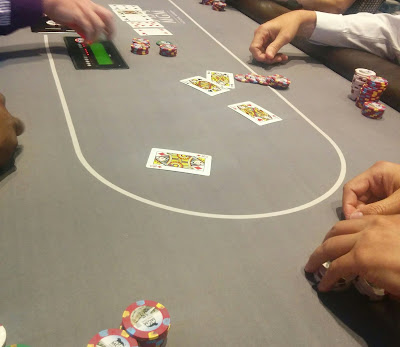 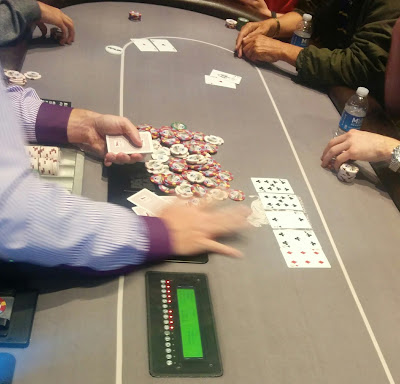 By Ace at May 05, 2017 2 comments:
Email ThisBlogThis!Share to TwitterShare to FacebookShare to Pinterest
Newer Posts Older Posts Home
Subscribe to: Posts (Atom)